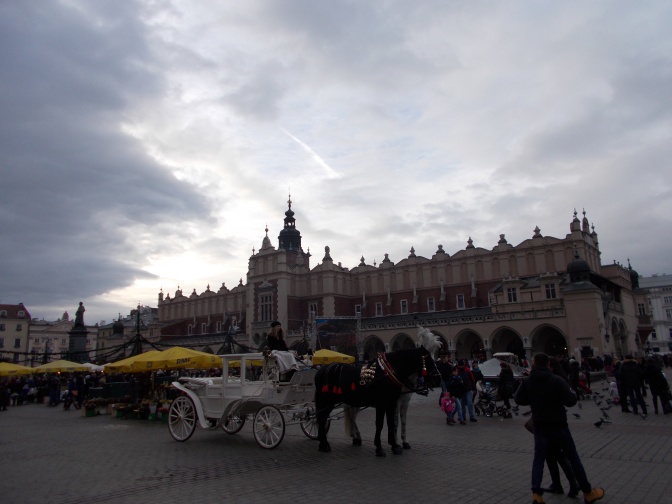 İngilizce’den muzdariplere kötü bir haberim var zira yazının geri kalanı bu dilde ilerleyecek. Because there are certain someone-s that should not know the rest of the story. Like my mom and dad and every single person in my family who might have an heart attack.

So, during the 4th day of our trip, my friend and I went to a city called Zabrze (pronunciation: Zabje) because we were supposed spend the Christmas in a friend’s house. He and his family welcomed us and it was a complete Polish Christmas, full of tradition and presents. (which i liked very much by the way :D) They had a huge dog called Biscuit. (pronunciation: bişkopt) He was the sweetest thing but way too needy. 😀 He never let us be and let me remind you: I was afraid of dogs! He’s almost as big as me, for god’s sake. But I tried my best to keep calm and got used to him. 😛

The whole family was like the sweetest people on earth. His parents, his grandparents, cousins, nieces (especially nieces!!! :D) It was really fun. They made us eat 12 diferent dishes (without meat) on Christmas Eve, because that’s the Polish tradition. There was only fish, like a lot of fish. Way too much for two girls from Anatolia, you know what I mean. Well, we tried our best so, that’s something? :’D

Whatever, I had a much bigger problem which was growing bigger and bigger as the days went by: MY FREAKING WISDOM TOOTH! At first, there was just a little pain inside my palate. And I didn’t think it was the tooth. But in 3 days time, I wasn’t able to open my mouth because the infection spreaded like crazy. I survived with painkillers for a couple of days. Then they took me to a dentist. On Christmas, yes. And my dear friend was so kind to take a photo so that it would remind me those beautiful days. (-.-) Well, after that I had a lot of medicine and it was okay. But I am supposed to have a surgery now: THE HORROR.

After Christmas we left their house and went to stay another friend’s house. We were thinking of going to Prague. But, since new year’s eve was coming it was impossible to do that without ending up broke. So we had more than 10 days in front of us and no plans. How cool of us, right? Well, we spent a couple of days there but I was supposed to leave because it was a waste of time. First I thought of going to Vienna and meet Asude, and I was almost planning. We even thought about going to Germany together but~ but~ my parents were like CREYZEY because I was supposed to travel alone with that infected tooth of mine. So, I had to call off that almost-plan. Whatever, we went to Krakow, the most beautiful city in Poland. (pronunciation: Krakuf) At least, everyone I met told me so. (and i don’t agree with them :D)

And the worst part of our story started. We went to find a hostel or something, but almost everything was booked because of NEW FREAKING YEAR’S EVE. And if there was a room, the price was like three times higher than usual. Thank god, Poland was really cheap for me. If not, I was screwed. We found a room for the first night, which was 29th of December. And I was going to spend the New Year’s Eve there. But there was nothing, not a single room. Then my friend messaged like everyone in Couchsurfing to find a place for me. Then we find a hostel, relatively cheap one compared to others. By the way, a Polish lady – Renata – messaged and told us that I could stay with her. Problem was solved. Kind of. It would be my first couchsurfing experience on my own. I would be alone for 4 days in Krakow and I was worried, how can i not. Well, we met wit Renata for a coffee that day and went to check this hostel Merve and I found at the last minute. It was a dorm room of 8. I was flipping, staying with 7 complete strangers? on New Year’s Eve? by myself? Well thank you I’ll pass, I said. Then we chatted with Renata a couple of hours and she was like the sweetest person on this entire planet. Of course I was still worried but she and her family made me feel like home during my time with them.

That part of the problem was solved but do you think it was the end? Nope. Not even close.

The first day I was alone, I went to this Free Walking Tour of Old Town. During the tour I met with two Turkish erasmus students (Gözde and Aslı) and it was a really nice day. The best part of this trip was making all these new friends, to be honest. At the end of the day Renata came to pick me up and took me to have the best pierogi in Krakow. But, shame! The place was closed for good. Then we went to her place. I met with her husband Patrick and her son Kevin. Patrick told me that he visited Turkey years ago and loved it. He had the best stories about Istanbul, traffic and the taxi drivers. Guys, believe me traffic in Istanbul had always been a caos. 😀 I learnt so many things about Poland and European history from him. It was great.

There was another surprise for me: another couchsurfer who happens to be from SOUTH KOREA! Is this the fate or what?! Lina, her Korean name was Eunjae, would be there on January 1st in the morning. And I would be spending the whole night in Main Market Square, which means outside. So, I suggested I could pick her up (at 5 am in the morning) and we could go to Renata’s place together; which I actually did. There was nothing special about New Year’s Eve, if you don’t count almost getting drowned in the human sea, freezed at -2 degrees outside and getting harrasted inside that crowd. That happens, they said. Yeah, whatever. (-.-) I’m still pissed off about that. Well, I was supposed to be outside till 5 am and I had no idea what to do. Until Zehra’s friend Aysu’s friend Seda’s friends came. (YEAH COOL, RIGHT?) 4 more Turkish girls. OMG, gotta love Poland that day. We also met with another group of friends from Turkey that day. One of the girls had her birthday and we sang her happy birthday in Turkish, inside the Polish crowd. 😀 hahahahahha It was so much fun. (ehe ehe ehe) Well, these 4 girls the first time I met in my life were also the sweetest people on this earth. :’D I was so so so so so lucky with people. One of the girls from Çorum, my hometown! I even found a Çorumlu (sdkkjhfdsjhfks) in Poland. We’re everywhere. :’D Literally. They took me with them; we went to Mc Donald’s and spent the rest of the night there. The best way to celebrate New Year, believe me. 😛

When it’s 5 am, we said goodbye and I went to pick up Eunjae. In a city I didn’t know, I was trying to find a girl I also didn’t know. But I managed. (YEY) She was so surprised that I knew so many things about Korea, and of course that I studied Korean. 😀 The next day I took her to Old Town and showed her around. (Yeah, I do that because I’m a Cracovian now :P) It was reaaaaaaaaaaaally a lot of fun. I need more friends from South Korea, I still think that they are the sweetest people on earth. Well, I think everyone is the sweetest so, ignore me. 😀 (But the day I would leave, she left me this. Tell me how can i not? :’D)